I was so excited to see this song win last night at the Oscar's! If you haven't seen the movie "Once," put it on your Netflix queue. You won't be sorry- it's such a sweet movie with some truly wonderful music.

Well, the meeting was every bit as adversarial as I had feared, but it is over. Thanks be to God.

I'm still, three hours later, feeling wound up and a bit nauseated. We still have to report our action to Presbytery, which is going to loads of fun, I'm sure.

I'm Not Looking Forward to It...

I wrote, rather cryptically, here a few weeks ago about an issue that was making me lose sleep. Well, it is all coming to a head tomorrow morning at our Presbytery committee meeting that I moderate. Everyone involved could use prayer.

Although I know that what we need to do is going to be incredibly painful, I know that it is absolutely necessary. We would be unfaithful to our committee's purpose if we didn't act and, worse, the larger church would have to deal with issues later if we let things slide.

Why did I agree to moderate this committee anyway?
Posted by Iris at 6:45 PM 4 comments:

I guess I'm just too much of a good girl who follows directions because when they said Pre-Kindergarten registration at the local elementary school began at 8:30 am, I believed them. So, I arrived at 8:15 am, thinking I would stand in line, only to find out that other parents had come much earlier and had been allowed to register. My daughter is sixth on the waiting list. I guess we'll be paying for another year of pre-school.

And last night while watching the news, I found out that I had been duped into signing a petition to get an anti-affirmative action initiative on the ballot. I know I should have asked for more information, but I was in a hurry to get to the grocery store when the woman approached me in the parking lot. She said that it for a civil rights initiative. Apparently there are a lot of people who, like me, were misinformed so, there's an investigation. Perhaps it won't even get on the ballot now.

They are forecasting another ice storm tonight. Oh, I hope that it bypasses us because our city hasn't yet recovered from December's storm. This was our back yard back then. I really don't want to wake up to this again... 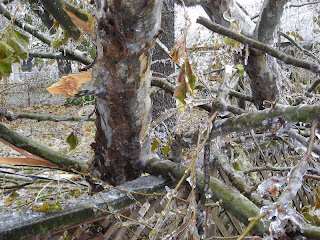 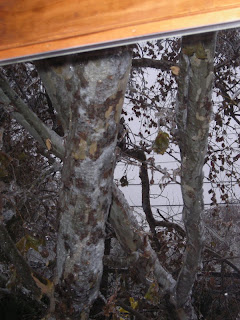 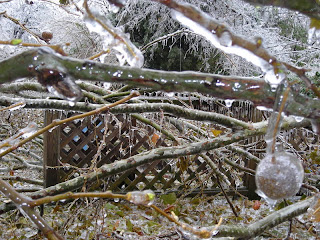 Although we have a new roof, we're still living with a hole on our ceiling that we've covered with cardboard until the restoration company can come fix it. They've got lots of people to deal with, so we have to be patient.

There are so many, especially lower-income folks who were given the middle finger from FEMA, who have had to deal with so much more. They haven't yet even come close to cleaning up all the debris. We just can't take another storm.

This is from Songbird. How better to honor President's Day?
Herewith, five Presidential questions.

1. Can you name the American Presidents we are honoring? Bonus: Any idea when their real birthdays are? (Don't look it up.)
Yes, Washington and Lincoln. I can't think of Washington's actual birthday, but Lincoln's was February 12- same as my Daddy.

2. Why do you suppose car sales are an important aspect of our President's Day observations in the U.S.? (Feel free to be whimsical.)
Well, it certainly would be one way of "honoring" our current President, by hanging around car salesmen and buying a Hummer.

3. Have you ever been President of a club or organization? How did that feel?
Yep. When I was a teenager, usually it was very exciting to be elected and then would kind of suck to have to do the job. Gratefully, since then I have not been President of anything.

4. If you could have dinner with any President of the United States no longer living, who would it be? Any particular questions you would like to ask? (Please feel free to substitute a nationally appropriate elected leader, such as a Prime Minister.)
hmmmmmm..... I guess Harry Truman because I would like to ask him about what he was thinking and feeling as he made the decision to drop the bombs on Japan.

5. On a more serious note, what are the qualities you hope for in our next President? (As above for those who live in other countries.)
I hope the President is honest, a peacemaker, inspires with hope rather than with fear, is able to mend ties abroad, but, above all, has wisdom. Also, I hope the President cares more about the country than getting re-elected.

ETA: Is anyone else having problems with the "spellcheck" and "add image" buttons on blogger?
Posted by Iris at 10:52 PM 7 comments:

The main reason, besides sickness, that I haven't been blogging much lately is that I have been self-censoring a lot. All of the sudden, I am finding myself intimidated and I don't know why.

I need to get over it, so for just this one post, I am going to make myself not self-censor, and just write..... the good, the bad and the indifferent.....I think bullets will help me not worry about complete sentences....

Okay, I'm reading back what I've written and I am resisting the urge to press "delete" like I have a dozen times over the past month or so. Forgive the messiness of this post, but I fear if I don't post something real right now, I might not again for a long time.

There's a nasty virus going around and it decided to visit us. My husband's been flat on his back for three days and I'm about as bad.

The Barack Obama "Yes We Can" video made me cry. So did this one, because it's funny and, sadly, true to what McCain believes about this war.

Join me in welcoming Wyldth1ng home from Iraq! You can find his blog here.

Wyld, thank you for service and we're glad you are HOME!
Posted by Iris at 9:04 AM 1 comment: