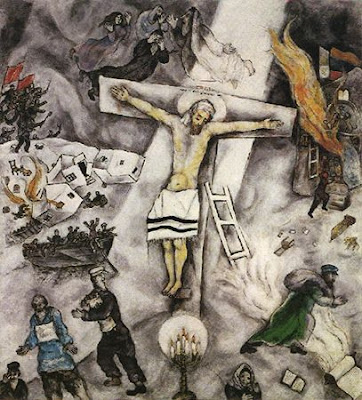 Let the same mind be in you that was that was in Christ Jesus,
who, though he was in the form of God,
did not regard equality with God as something to be exploited,
but emptied himself, taking the form of a slave, being born in human likeness.
And being found in human form, he humbled himself
and became obedient to the point of death— even death on a cross
Philippians 2:5-8
(Marc Chagall: The White Crucifixion)
Posted by Iris at 8:38 AM

I've never seen that painting before, thanks for sharing it. And Amen.

Thank you. And I LOVED your comment over at my place to Trinity's shoeless state. :-)

I am glad you are feeling somewhat better. As for the med that will not remove any and all sexual desire--I can relate. I did not want to choose between depression and marriage...but things are some better. There is hope.

What a beautiful picture.

You are in my prayer Iris, during this Holy Week.